Now that it has been a few months since initially establishing a dividend portfolio, I have been focusing on adding to existing positions as opposed to establishing new positions.

The caveat to that will be when my pension rollover is completed, as I will be using those funds to establish holdings within the REIT and BDC sectors. The reason I am waiting is because my primary portfolio is in a taxable account, and those sectors are best held within an IRA.

With that said, let’s dig into my recent buy of Cummins Inc.

Have you ever been driving down the road and seen a pickup truck that bellows out a black cloud of exhaust when they stomp on the gas pedal?

If so, there’s a good chance that truck has a Cummins diesel engine.

Cummins Inc. was founded in 1919 (although was known under the name Cummins Engine Company until 2001) and they design, manufacture, distribute, and service diesel and natural gas engines, and engine-related component products worldwide. The company is headquartered in Columbus, Indiana.

Cummins is broken down into four primary segments:

Cummins by the Numbers

Cummins pays an annual forward dividend of $4.56 per share. Based on my recent purchase price of $140.88, this translates to a dividend yield of 3.24%.

They announced a 5.56% dividend raise back in July, which is a dip down from their recent trend on dividend annual growth rate as seen below:

Cummins is a Dividend Contender with a 13-year history of paying increasing dividends and has a payout ratio of roughly 42%.

Their most recent quarterly earnings, which were announced at the end of July, were $3.29 which missed EPS estimates by $0.34. However, they beat analyst estimates by $320M on reported revenue of $6.13B (~21% YoY increase).

During their earnings call, Cummins also raised their 2018 outlook with expected revenue growth of 15-17% versus the original 10-14%.

Lastly, Cummins recently announced that they have entered into an accelerated share repurchase agreement with Goldman Sachs to repurchase $500 million in shares.

Since buying Cummins back in May when I established my DGI portfolio, I’ve been keeping an eye on the price movement as this is a company that I really like.

That may be in part because I’m always on the lookout for an old rat rod style car that has a Cummins diesel engine swap.

On Thursday I had set a limit order for $141.50 and just narrowly missed on that being triggered when the low for the day only reached $141.55. However, seeing that there was still some downward pressure in after-market trading I revised my limit order and the trade was executed on Friday at $140.88.

Here is a summary of my order: 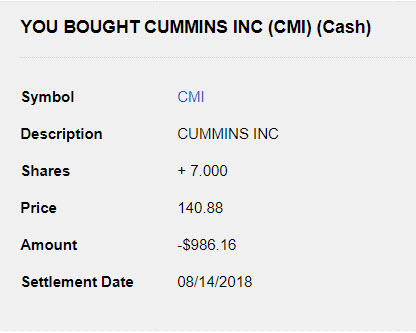 The 7 additional shares will add $31.92 in annual forward dividend income to my portfolio. 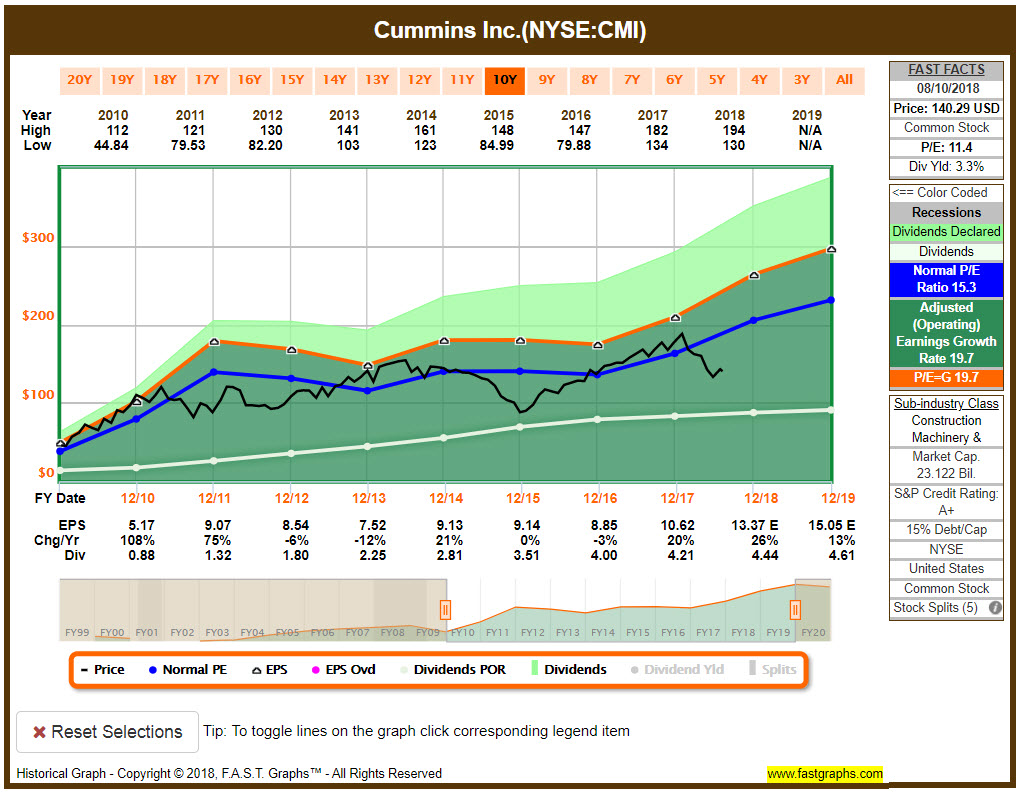 Taking a look in F.A.S.T Graphs and reviewing Cummins based on adjusted operating earnings, they are currently trading at a P/E ratio of 11.4 versus their normal P/E ratio of 15.3–indicating they may be undervalued right now.

Cummins has had rather volatile earnings lately, and last year missed on an annual basis by a considerable margin. However, expectations are for increased earnings this year and continued strength in their revenue growth. 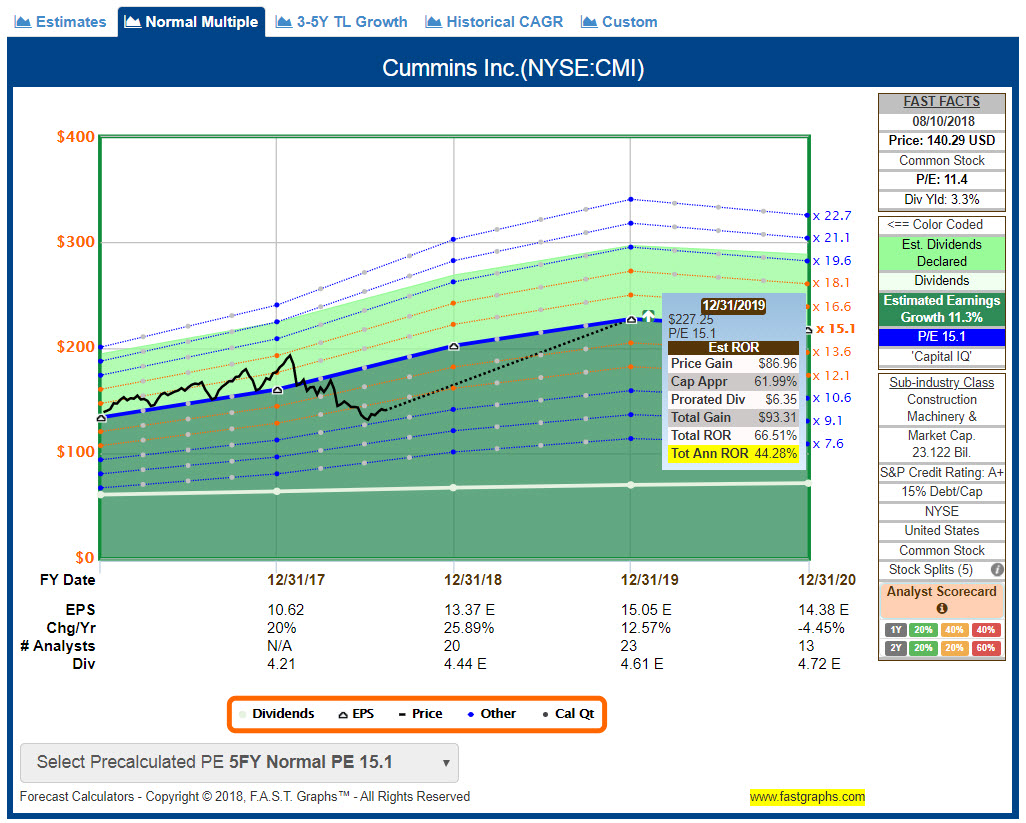 With analyst expectations for continued growth into 2019, Cummins could be positioned to provide a nice return. The above graph highlights the potential if CMI is able to return to their normal P/E ratio by the end of 2019.

While I don’t necessarily expect that this will happen, I sure would be pleased with a 44% total annual rate of return!

It isn’t all roses for Cummins Inc. as there are certainly challenges ahead of them. The volatility of earnings has been a concern and commodity costs will be a challenge for all in this sector.

Despite their under-performance compared to the industry, the Cummins management team has done a good job of growing revenue and have exceeded the industry average in terms of operating cash flow growth. In addition, the company has shown a track record of successfully managing their debt.

With a nice history of paying increasing dividends and my current average dividend yield of 3.21%, I believe the company is well positioned to overcome these challenges and am happy that I was able to add to my position.

What do you think of Cummins?