Holy guacamole, October has been a busy month!

While the month of September was a bit quiet as I missed my goal of investing $2,000 to $3,000 in new capital due to limited buying opportunities, I have more than made up for that this month.

My recent purchases have also been focused on adding to existing positions within my portfolio as opposed to opening new positions, but that changed as well with this purchase.

In a nutshell, I have been looking at adding to my holdings in the Financials sector, and as tempting as it was to add to one of my existing positions, I felt that BlackRock was too good of an opportunity to pass up right now.

Similar to one of my existing holdings, Franklin Resources, BlackRock, Inc. is a publicly owned investment manager that provides its services to institutional and individual investors.

BlackRock is the world’s largest asset manager with $6.4 trillion assets under management, which is an 8% increase in AUM compared to last year. BlackRock really separates themselves from a company such as Franklin Resources in two key areas:

The latter point is quite important–as more and more people are moving towards passive investing through index funds, an asset manager can be at risk if they are not prepared for that shift as their primary source of revenue is from fees charged to investors.

BlackRock is considered by some to be the king of passive investing due to the popularity of their iShares ETFs. In their most recent quarterly earnings report, they had $11 billion of quarterly net inflows (new money coming under their management) which was led by iShares. At this time, BlackRock generates approximately 50% of their revenue via passive index funds therefore they are extremely well positioned for the shift away from actively managed funds.

The company was founded in 1988 and is headquartered in New York, New York. They have offices across the globe with a presence in approximately 30 different countries.

BlackRock By the Numbers

BlackRock has been rewarding investors with 14 years of uninterrupted dividends and 9 years of increasing dividends. The outlier was 2009 when they held their dividend steady during the Great Recession.

Taking a look at Simply Safe Dividends, we see that BlackRock has a dividend safety score of 98 and their current dividend yield of 3.12% is well above their 5-year average yield. The current yield is actually the highest that it has been in over five years.

However, the stock has been hammered this year with a decline of approximately 25% since the beginning of the year when the stock was trading at approximately $525/share. 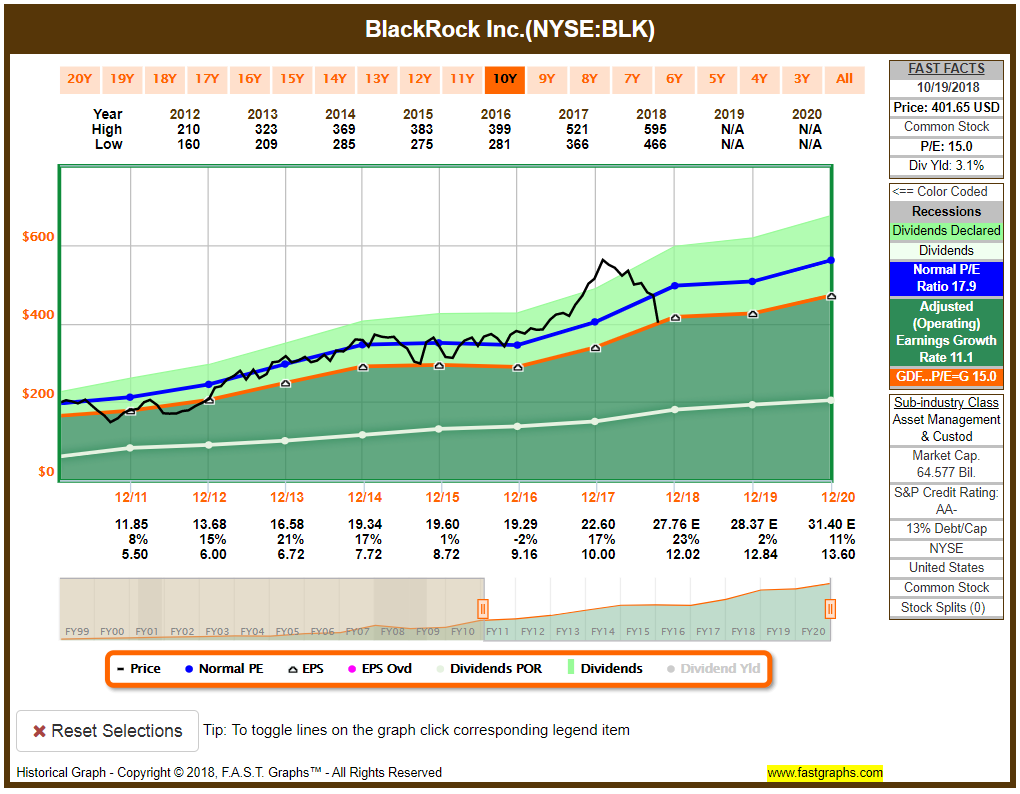 Here is a look at my own spreadsheet that tracks the dividend growth of each holding: 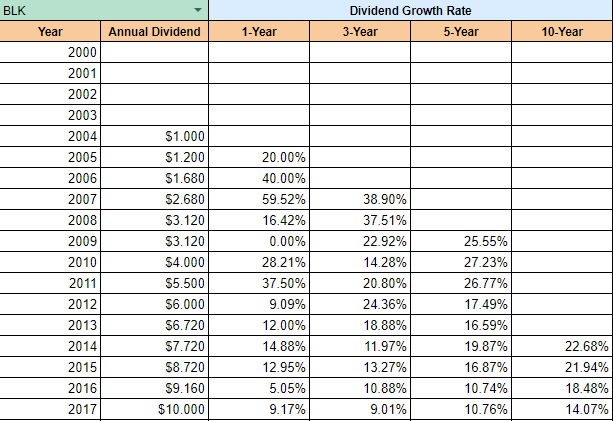 Looking at their track record, one can see that they have consistently raised their dividend by a respectable 10% or more in most years. Based on current projections for their dividend payments this year, they will be north of 20% YoY in dividend growth again.

As I mentioned during the recap of my Home Depot purchase, you will see that BlackRock also froze their dividend in 2009 yet they have still maintained a very respectable 14% dividend growth over a 10-year period.

As I mentioned earlier, I was giving serious consideration to adding to one of my existing positions in the financial sector with the price of Franklin Resources being extremely tempting as they have dipped below $30/share.

However, as I wrote during my analysis of a losing position in BEN, I have been hesitant to go too strongly into Franklin Resources given concerns on their AUM that continues to decrease and forecast for flat to negative earnings growth.

Given my concerns on adding to Franklin Resources, I decided to run a screen against the Financials sector and that is where BlackRock caught my attention. And then as the market opened today and I saw the price was declining, I could not resist. 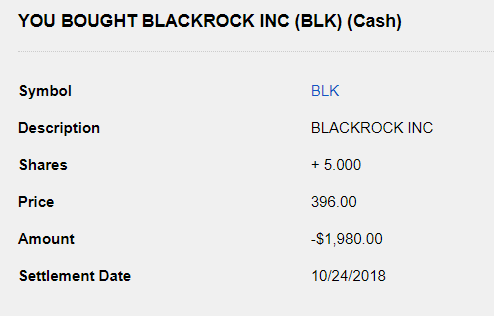 I will continue to watch BlackRock, as well as Home Depot, for potential secondary purchases if the price continues to move downward. With BlackRock, I would be looking to add if the price declines by approximately 5% from my purchase point or around $376.00/share.

However, I will admit that with the amount of capital that I have invested this month, I am hoping the market pauses for a little bit so I have the funds available to take advantage if the prices do move farther down.

While I have been very focused on adding to my existing positions, it is important not to fear change and be willing to adapt to changing circumstances. By doing so, I believe that I have been able to add a position in an extremely solid company at an attractive price.

In addition, the purchase of BlackRock brings my Projected Annual Dividend Income (PADI) up to $4,990.02!

That means that I am less than $10.00 away from my goal of reaching the $5,000 forward income milestone. When I purchased Home Depot, I mentioned that I was confident that I would reach my goal, but I did not expect to get so close only a couple of days later.

Overall, I am comfortable making room for both in my portfolio but will continue to evaluate that moving forward.

What do you think of BlackRock?