After not making any purchases in March, I was able to make a few purchases during April and also had a more substantial addition to my portfolio as a result of my first options trade. However, I still found the market overall to be somewhat stingy with the buying opportunities.

Let’s take a look at how things went!

While the quarter-opening months are my quietest when only looking at my baby portfolio (hat tip to Bert over at Dividend Diplomats for a real addition to his portfolio), you will see that the total numbers are actually quite nice due to some of the investments in my 401(k) account.

The month of April brought in a spectacular $3,309.63 in dividend income that was broken down as follows:

As was the case in March, my retirement account has clearly stolen the show yet again with just shy of $3,000 being reinvested. When you strip that away, you can see that the quarter-opening months are considerably less impressive that the other two months of the quarter.

Comparing the month of January to April, there are a few notable differences that impact the bottom line.

Disney only pays their dividend twice per year, therefore April and October miss out on that dividend. Likewise, Pepsi has an unusual payout schedule to start the year with payments in January and March rather than January and April. On the positive side, Coca-Cola does payout in April but not in January.

While none of the above have a significant impact on my results, it does explain why my April payout is slightly lower than what was received in January.

The most significant change here is the fact that Uniti Group (UNIT) slashed their dividend after the legal rulings against Windstream. This has always been an extremely speculative holding, however many–myself included–expected the legalities to be in favor of Windstream and unfortunately they were not. With the vast majority of UNIT’s revenue coming from WIN, the ruling and subsequent WIN bankruptcy resulted in a major cut.

As a note, I have chosen to ignore my portfolio guideline of selling any holding that cuts their dividend and will continue to hold UNIT.

My reasoning for that is due to: 1) my position in UNIT is quite small (for the jokesters, note I did not say small unit); 2) I’ve always viewed UNIT as a speculative holding so I accepted this risk when buying; and 3) if they survive, I still believe they have a lot of upside potential.

With all that said, reinvestment of dividends in my brokerage account and Rollover IRA have added an additional $17.03 in projected annual dividend income.

While the market did not produce an abundance of buying opportunities, I was able to take a few nibbles and add to existing positions.

The most significant addition to the portfolio was a result of having my first cash-secured put option assigned to me. I’ll share more details on that option trade in a future post, particularly the key mistake that I made that contributed to the put being assigned.

Through a combination of the assigned put and the additional purchases, I was able to deploy a robust $8,275.30 of new capital.

Here is a recap of my April purchases:

I’ve wanted to add to my position in NEE for quite some time, and unfortunately did not have enough capital to go around in December when they had dropped down near my original purchase price of ~$163.00/share. While this is a bit more than I ideally wanted to pay, I was comfortable taking a small nibble with the plan to add more if the price kept coming down.

Overall, these purchases raised my projected annual dividend income by a healthy $276.00!

The month of April brought a minor uptick in the number of dividend raises–well, one may argue that statement because I apparently missed an increase from PEP back in February but saw the announcement posted on Seeking Alpha at the end of April so I am counting it here.

All four of the dividend raises were modest single-digit increases, with Exxon Mobil and Apple leading the way with 6.10% and 5.48% increases respectively. The smallest raise was Pepsi with a 2.96% increase while Procter & Gamble rounded things out with their 4.00% raise. 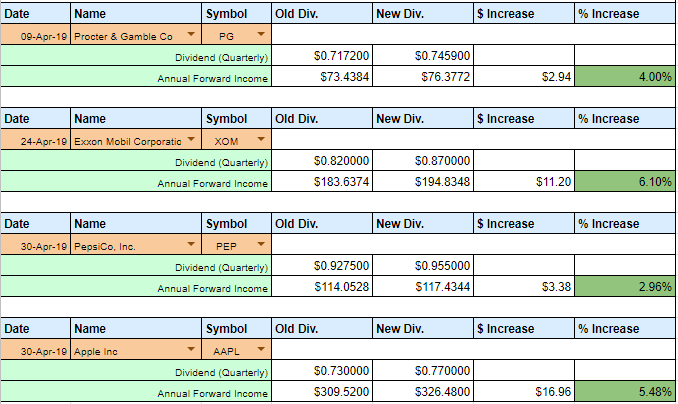 These four raises combined resulted in an increase of $34.48 in projected annual dividend income.

Despite only having four increases, the impact to PADI is the 2nd highest of 2019 in part because Apple is my largest holding and Exxon Mobil is in the top 10 holdings.

Looking ahead to May, I am expecting a slow month again with Cracker Barrel and Clorox on my list of anticipated increases. Apple has typically announced in late April or early May, and this year they squeaked in on April 30th so there will be nothing more from them–despite what many felt was a lackluster increase.

The month of April was quite busy but I am getting back into the swing of writing again and was also able to make a few purchases to continue feeding the machine.

While the chart below shows a considerable dip down from the results in March, when I look at the big picture that includes my 401(k) account, my total in April nearly doubled the month of March. I know that I am not alone in saying I’ll take that whenever possible.

Fortunately, I know that May will deliver better results from my pure DGI portfolio and that is encouraging.

Taking a look at the dividend tripod, as I like to call it, each leg made a nice contribution to the overall results. With the combination of reinvested dividends, dividend raises, and new capital, the portfolio achieved an increase of $327.51 in total PADI. Here you can see how each leg of the tripod contributed:

The brokerage account now stands at a PADI of $4,534.00 and continues to increase; however, I will need to continue making increases like this past month if I stand a chance of reaching my annual goal of $6,500.00 in forward income.

There is still a decent amount of dry powder at the ready in my brokerage account and I am continuing to watch for additional buying opportunities. I’m confident that May will bring some opportunities, particularly when you consider the historical trend that the S&P 500 begins a slow decline from May through September.

Until then, how was your month of April?